To share your memory on the wall of Robert May, sign in using one of the following options:

Provide comfort for the family of Robert May with a meaningful gesture of sympathy.

Provide comfort for the family by sending flowers

We encourage you to share your most beloved memories of Robert May here, so that the family and other loved ones can always see it. You can upload cherished photographs, or share your favorite stories, and can even comment on those shared by others.

The Schmid Family, The Mike Archer Family, and others have sent flowers to the family of Robert May.
Show you care by sending flowers

Posted Sep 21, 2019 at 11:08am
Mr. May was my 6th grade teacher at Enterprise 1963-1964. He was my absolute favorite teacher, EVER! In 1986, my daughter was fortunate to have him as her 6th grade teacher. The picture is from the "end of school" party at Joyland with Mandy. I'm saddened to hear of his passing..... my thoughts are with his family.
Sharon Hawkins Posted Sep 21, 2019 at 09:39am
I got to know Bob when my husband Pastor Andy Torres served the Peck United Methodist church. What a blessing Bob was to the church and the people of Peck. I am sure that Andy and Bob are sharing all kinds of stories in heaven right now. May God's peace and His love surround you all at this time.
Judy Torres
Comment Share
Share via:
TF

The Schmid Family purchased flowers for the family of Robert May. Send Flowers

The Mike Archer Family purchased the Medium Dish Garden for the family of Robert May. Send Flowers 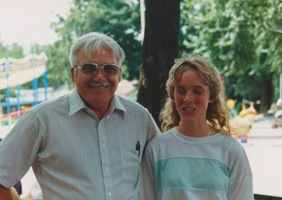