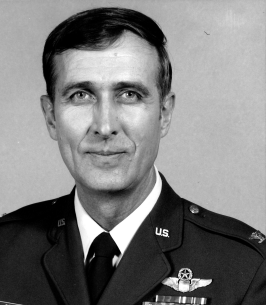 Col. Wade Leland Green (Ret. USAF) 90, died on August 11, 2021 in Derby KS. He was born in Artesia
NM on July 29, 1931. His parents, Herman L. Green and Georgia Edna Dungan preceded him in death.
He is survived by his wife, Lynette Morey Green, sisters Jean Green Brewer of Santa Fe NM and Willa
Green Connally of Richardson TS. He is also survived by his brothers-in-law Kevin R. Morey (Sharon), and
Kent M. Morey, both of Derby KS and sister-in-law Ann M. Morey. Also surviving are nieces Kelle
Connally Horie, Katie Connally Guthrie (Dan), Alicia Morey Looney (Jon), Jennifer Morey Fielden (Nic),
Chelsea Morey Pritchett (Michael), Katelin M. Morey, and Meghan E. Morey. Surviving nephews are
Charles Brewer (Patty), Brian R. Morey (Jill), Wade S. Morey, and Michael K. Morey. Wade is also
survived by numerous great nieces and nephews and goddaughter Laurène VandenNeste of Paris
France.
Wade attended school in Artesia where he was active in the 4-H club, Future Farmers of America, the
Order of DeMolay and was a member of the First Methodist Church. He graduated as a ROTC
Distinguished Military Graduate from New Mexico College of A&M and entered the Air Force as a
commissioned regular officer at San Antonio TX. Following flight training at Moore AB and Laredo TX, he
became a jet fighter flight instructor and served tours in that role at Laredo, Waco, San Antonio TX and
as an exchange officer with the Royal Air Force in Anglesy North Wales. After attending the Air Force
Command & Staff College, he completed the conversion to the F-4C Phantom at Tucson AZ and was
assigned to the 366 th Tactical Wing at DaNang Vietnam where he flew 161 combat missions, 100 of
which were over North Vietnam. Following his combat tour, he was assigned to George AFT CA as an F-4
flight instructor and served a temporary tour at the Pentagon. He then transferred to the 49 th TFW at
Holloman AFB NM and from there deployed to Spangdahlelm Germany. He was then assigned to the
Joint Military Advisory Group-Korea as an operational advisor to the Republic of Korea Air Force. A four-
year tour at the Pentagon followed with duty as the Deputy Chief of the Security Assistance Division of
the Plans and Operations Deputate, negotiating the sale of the F-16 to the European Consortium. In
1976, Colonel Green became Vice Commander of the 32 nd Tactical Fighter Squadron at Camp New
Amsterdam, The Netherlands. He assumed command of that unit in February 1977. In 1978, he was
reassigned to Spangdahlem as the Vice Wing Commander. Col. Green was then assigned to Incerlik
Turkey as Commander of Incirlik Air Base. He returned to Headquarters TAC at Langley AFB where he
served as Director of Forces and Deputy Inspector General until his retirement in April 1985, having
served his country for 30 years. After retirement Wade worked as Manager, Albuquerque Operations at
Brewer Oil Company in NM, then became a Master Gardner in Williamsburg VA. Wade and Lynette
returned to Kansas in 2015 and have enjoyed being with family and friends and living on the golf course.

Col. Green was a command pilot with more than 5600 flying hours. His military decorations include the
Legion of Merit with two Oak Leaf clusters, Distinguished Flying Cross with four Oak Leaf Clusters, and
the Air Medal with 15 Oak Leaf Clusters. There will be a Celebration of Life in Derby and he will be
interred in Arlington National Cemetery.