To share your memory on the wall of Dick Dennis, sign in using one of the following options:

Private Family Graveside Service will be held at White Chapel Memorial Gardens. A Celebration of Dick's life will be scheduled and announced at a later date.

Private Family Graveside Service will be held at White Chapel Memorial Gardens. A Celebration of Dick's life will be scheduled and announced at a later date.

Receive notifications about information and event scheduling for Dick Dennis

We encourage you to share your most beloved memories of Dick Dennis here, so that the family and other loved ones can always see it. You can upload cherished photographs, or share your favorite stories, and can even comment on those shared by others.

Posted Mar 23, 2020 at 05:58pm
Dick, I will always remember how you were always upbeat and smiling. You were always friendly and respectful to to all of us you came in contact with.
Rest In Peace brother. I’ll see you again in Heaven!! Roger
Comment Share
Share via: 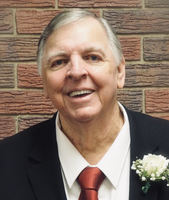