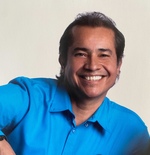 Nicklos Leandro Mares
November 3, 1954 – December 29, 2020
Nicklos ‘Nick’ L. Mares, age 66, native New Mexican and current resident of Derby, KS passed away suddenly on Tuesday December 29th, 2020 in Wichita, KS. Nick is survived by his wife Denine; daughters Nicole Herrera, Tierza Rose Torrez and husband Daniel; grandchildren Josiah, Selah, Eliannah, and Jude Herrera, Alonzo and Ezra Mares-Torrez; his father Gilbert Mares; sisters Rose Briggs and companion Bob, MaryAnn O’Neil and husband Mike; nieces, nephews, cousins, other extended family and many dear friends.
Nick was preceded in death by his Mother Juanita (Apodaca) Mares, Sister Pauline DePari, and Grandmother Antonia Apodaca.
Born in the small town of Springer, New Mexico Nick was “driving tractors by the time I was seven,” he used to say; he was always eager to help where he could. His most cherished memories from childhood included his three younger sisters and the time he spent with his grandmother Antonia. Incredibly smart from an early age, he excelled through school and by seventeen left home to join the U.S. Army. A proud Vietnam Veteran, Nick served his country as a paratrooper. After serving four years in the military he began a career as a systems and quality engineer. He worked for IBM, Intel, and FSI, retiring in 2002. He later moved to Kansas to be near to his daughters and grandchildren. When his youngest daughter moved back to Albuquerque, NM he spent time traveling between the two states to keep up with family and friends and, of course, get his fix of extra-extra hot green chile.
Nick loved his family, his country and the great outdoors. He was never short of stories to share about his adventures and the lessons he learned along the way. He pushed others to be the best they could be and was the first to brag when it came to his daughters and grandchildren; he cherished the time spent with them so much, especially with his grandchildren.
Due to Covid restrictions a private memorial will be held in his hometown of Springer, New Mexico with close family and friends. Burial will take place in Santa Fe, New Mexico at the National Cemetery.
1 Corinthians 15: 54-58
Arrangements are being made through the Smith Family Mortuary in Derby, KS.
Flowers are appreciated or a donation made to the New Mexico Disabled American Veterans in person or online at https://www.dav.org/veterans/resources/why-donate-to-dav/
Albuquerque, New Mexico
VA Regional Office
500 Gold Avenue, SW, Rm 3116
Albuquerque, NM 87102
(505) 346-4864