To share your memory on the wall of Leon Jelinek, sign in using one of the following options:

Receive notifications about information and event scheduling for Leon

We encourage you to share your most beloved memories of Leon here, so that the family and other loved ones can always see it. You can upload cherished photographs, or share your favorite stories, and can even comment on those shared by others.

The Tilburys sent flowers to the family of Leon Edward Jelinek.
Show you care by sending flowers

Posted Jul 29, 2020 at 10:14pm
Praying for your family, I didn’t know this family but my Nana also had passed and had her obituary here. Just spreading the love.

The Tilburys purchased flowers and planted a memorial tree for the family of Leon Jelinek. Send Flowers

Posted Jul 14, 2020 at 09:41am
Sharon, Phillip, and Lisa, I share your loss and sadness. Your dad was actually my father Bernard's cousin, but he was my "Cousin Leon" for as long as I can remember. When I was in elementary school here in Laramie, your dad drove "Aunt Helen", your grandmother, to visit us one summer. Aunt Helen found some rather large rocks that she wanted to take home to put in her rock garden, and I remember the amusement surrounding Leon driving back to Medford, OK, with a trunk full of rocks. Your dad also came out to visit us when we lived in Washington, D.C. He came to study some of the architecture and I thought that being an architect was an intriguing career. I'm glad I was able to visit with Leon several times in Stillwater in recent years. I am especially thankful that last summer he came by to visit and have dinner with us here in Laramie. He had a great smile and a wonderful laugh that I will always remember. Both of your parents were kind, gentle people. John and I will miss your dad. We send our sympathy and love. Landra Rezabek
Comment Share
Share via:
HS

Flowers were purchased and a memorial tree planted for the family of Leon Jelinek. Send Flowers 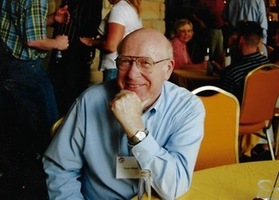