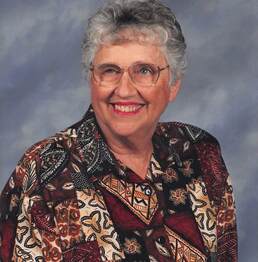 Billie Jean was raised along with her two siblings in Sedan, Kansas by her parents Earl & Goldie (Fulk) Bowersock. In 1946, she married the love of her life, Jack Polk. They were the cheerleading and all-around sports stars of their Sedan High School. Sports played a leading role in their life together with golf being their favorite, though quail and pheasant hunting with the dogs came in as a close second. Billie was a bridge player deluxe, avid bowler, and a big Derby High School Football fan. She followed her children, grandchildren, and great grandchildren in all of their sporting
adventures.

After working at Boeing while Jack was in college, Billie was a stay-at-home mom and lunch lady at Pleasantview Elementary during the kids' schooling. She returned to Boeing in 1978 and retired in 1995 after Jack passed away. Her life then turned to traveling for grandkids' & great grandkids' sporting events. She became a K-State
football fan when her grandchildren attended college there, finding a passion for tailgating, Bowl games and K-State apparel.
She was a Derby Recreation Center gym rat from 1985 until only a handful of years ago when she could no longer drive. Billie was called the "Strongest Old Lady" by her gym mates, attending exercise classes and using the weight room every day.

She would cook for her children and their spouses a dinner of their choice for each of their birthdays. Attendance turned from eight to many dozen loved ones over the years. She loved having everyone over for holiday dinners.

She met health challenges in her later years, facing Macular Degeneration, COPD, and Rheumatoid Arthritis. Driving was the hardest to give up, but new routines were accepted with Grace. She loved her family and would do anything for them.
She was preceded in death by her parents Earl and Goldie Bowersock, Sister Earlene Barnett, brother Bob Bowersock, and Husband Jack Polk. She is survived by sons David Polk (Jane), Douglas Polk (Mary), and daughter Janet Polk Fine (Larry); Grandchildren Jamie Polk Steinert (Kevin), Kevin Polk (Meghan), April Knudson (BJ), Meagan Polk Wesley (Levi), Lindsay Fine (Nick), Mallori Fine Bexten (Tim) and Nathan Fine; and 14 great grandchildren.