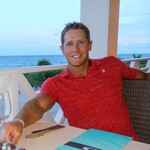 Aaron was born in Wichita, KS to parents Layne Wells and Christine (Smith) Carlson. He attended Colonial Heights AG from the time he was eight days old. He loved Royal Ranger’s and being a part of the youth group, where he formed lifelong friendships. He graduated from Augusta High School in 2000.

Aaron could light up a room with his welcoming and genuine smile. He was blessed with a great sense of humor and a compassionate heart for all living things. He lived life to the fullest and found joy in hunting, fishing, traveling, cheering on the K-State Wildcats, and going to the gym. Beneath his handsome and tough exterior was a humble man who spent his life letting God’s love shine through him by putting others first. His favorite moments in life were those spent with family, friends, and adventures with his life long love, Amber, and his beloved dogs, Buck and Baxter.

He was preceded in death by grandparents, Owen and Betty Smith, Lloyd and Alene Wells, and Fred and Thelma Carlson; and his beloved dog, Buckley.

Memorials have been established with Colonial Heights Assembly of God or Kansas Humane Society.